When art collector, businesswoman, social figure, and philanthropist Marjorie Merriweather Post left to the public her northwest Washington, D.C. estate, she endowed the country with the most comprehensive collection of Russian imperial art outside of Russia, an exquisite 18th-century French decorative art collection, and 25 acres of serene landscaped gardens and natural woodlands. Opened as a public institution in 1977, today Hillwood Estate, Museum & Gardens offers a gracious and immersive experience unlike any other. Highlights of the collection include Fabergé eggs, Russian porcelain, Russian orthodox icons, Beauvais tapestries, and Sèvres porcelain, and Post’s personal collection of apparel, accessories, and jewelry. Thirteen acres of enchanting formal gardens include a Japanese-style garden, rose garden, French parterre, and a greenhouse full of incredibly beautiful orchids.

Exquisite works from the legendary jeweler to the last court of Russia are revealed in a new light in the special exhibition Faberge Rediscovered, on view at Hillwood Estate, museum & Gardens in Washington D.C. 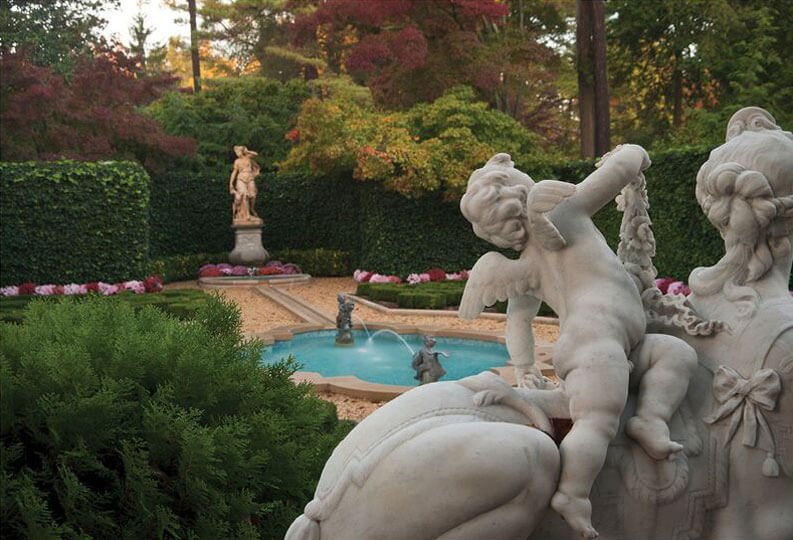 Treasures created by the firm of Peter Carl Fabergé (1846-1920) have inspired admiration and intrigue for more than a century, both for their remarkable craftsmanship and the fascinating histories that surround them. Featuring more than 100 objects, Fabergé Rediscovered will unveil new discoveries relating to Hillwood’s own collection of Fabergé imperial Easter eggs and other famed works, highlighting new attributions and provenances and providing a new framework to study and understand 19th- and 20th-century jewelry and goldsmithing. The special exhibition will display the greatest examples from Hillwood’s Fabergé collection, left by Marjorie Merriweather Post for the benefit of future generations, along with important loans from other museums and private collections, including the Metropolitan Museum of Art, the Musée d’Orsay, the McFerrin Collection, the Edouard and Maurice Sandoz Foundation, and His Serene Highness Prince Albert II of Monaco. 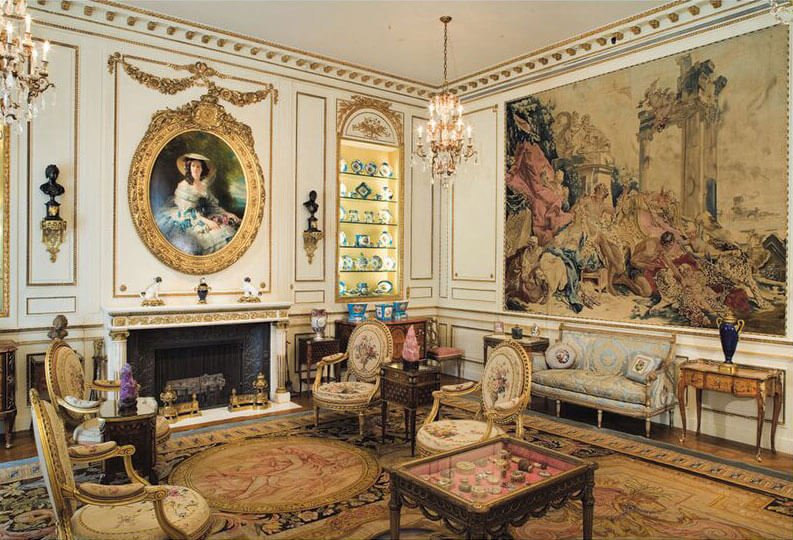 “Marjorie Post was a serious collector and approached the collecting of Fabergé as she did her important collection of French 18th-century and Russian imperial art, as an avid student and connoisseur. As a result, she assembled an important and impressive collection of these intriguing works,” explained Kate Markert, executive director of Hillwood. “Since it’s been over 22 years since Hillwood’s Fabergé collection was last examined in a book or exhibition, this fresh look at the works of Fabergé, revealing new information, attributions, and provenances for Hillwood’s objects, is long overdue.” 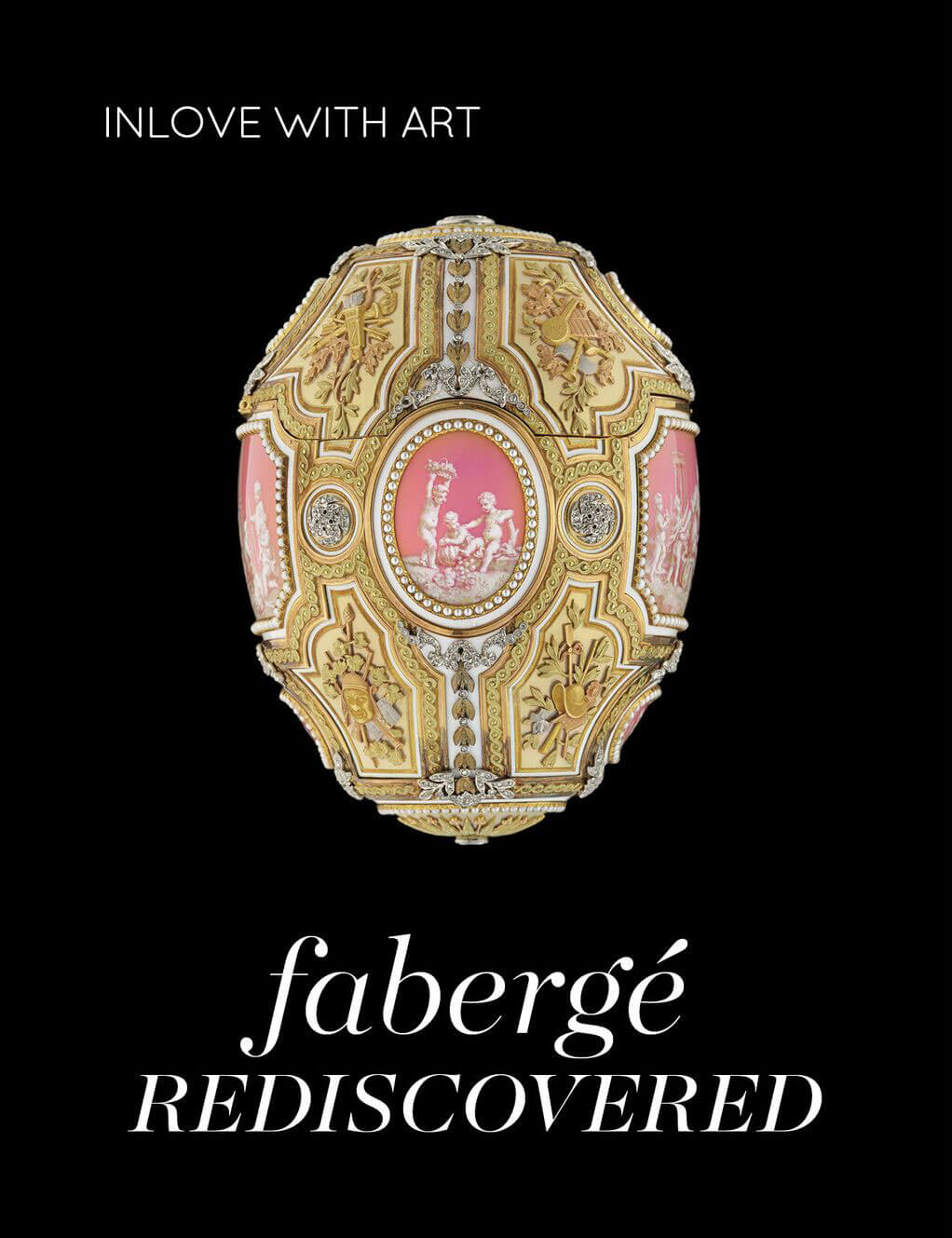 The famous discovery in 2014 of a long-lost imperial Easter egg—Tsar Alexander III’s 1887 Easter gift to his wife, Tsarina Maria Fedorovna—by a scrap metal dealer in the Midwest not only made headlines but also prompted new findings about Hillwood’s own collection. Newly uncovered facts relating to the rediscovered egg confirmed that the Twelve Monograms Egg, long believed to have been made in 1895, was actually one of the two imperial Easter eggs fabricated in 1896. The fascination with Fabergé continues to uncover new facts and discoveries about the storied jeweler to the court of St. Petersburg. Hillwood’s collection has been the focus of study for several of its curators, beginning with Post’s curator, Marvin Ross, who published a book about Hillwood’s Fabergé in 1965. 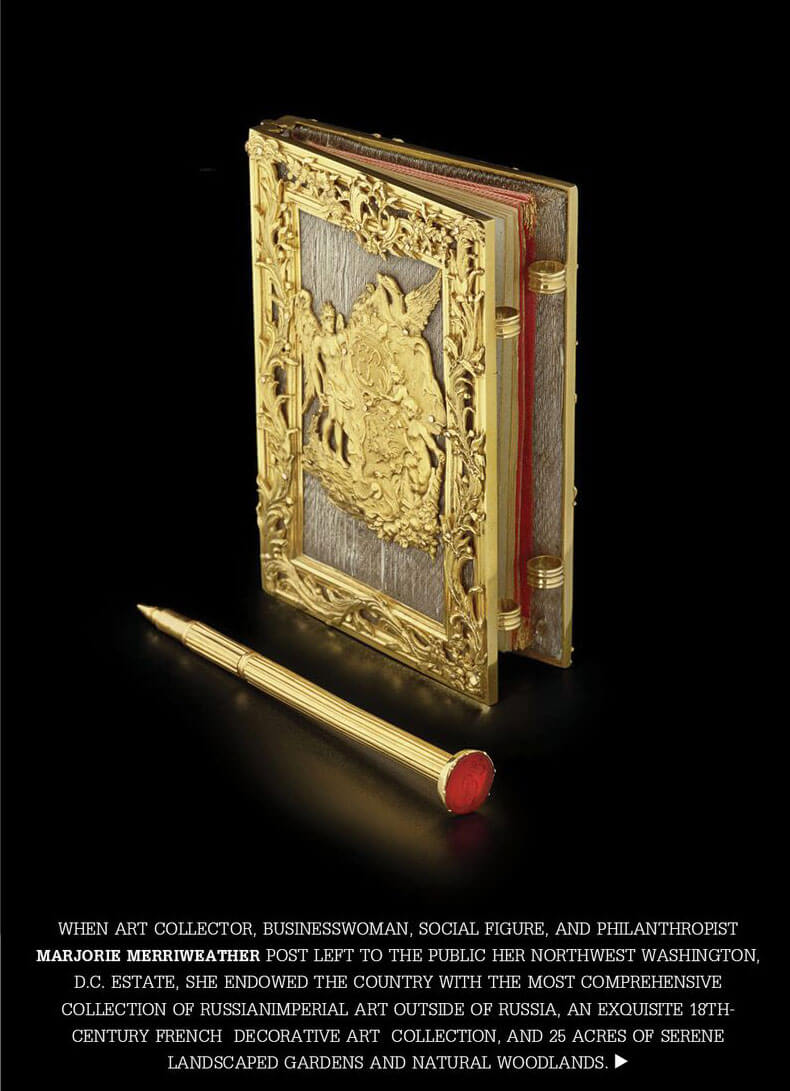 “Hillwood’s Fabergé holdings of about 90 objects represent a small portion of over 5,000 Russian objects in the collection,” said Zeisler. “That Post and Ross dedicated their first publication on the collection to the works of Fabergé is a testament to the jeweler’s importance in the history of decorative art. This new research, along with the updated attributions and provenances, will offer interest and intrigue to even the most knowledgeable Fabergé aficionados, while also introducing the famous jeweler to new audiences.”

Post began collecting art in the first decade of the 20th century. In furnishing her New York apartment, she adopted a taste for 18th-century French style, which was the design trend of the day. The first Fabergé pieces she collected can be seen in the context of her newfound interest in French decorative art, particularly as they aligned with the criteria she developed for collecting: They were beautiful, finely crafted, and were associated with royalty. 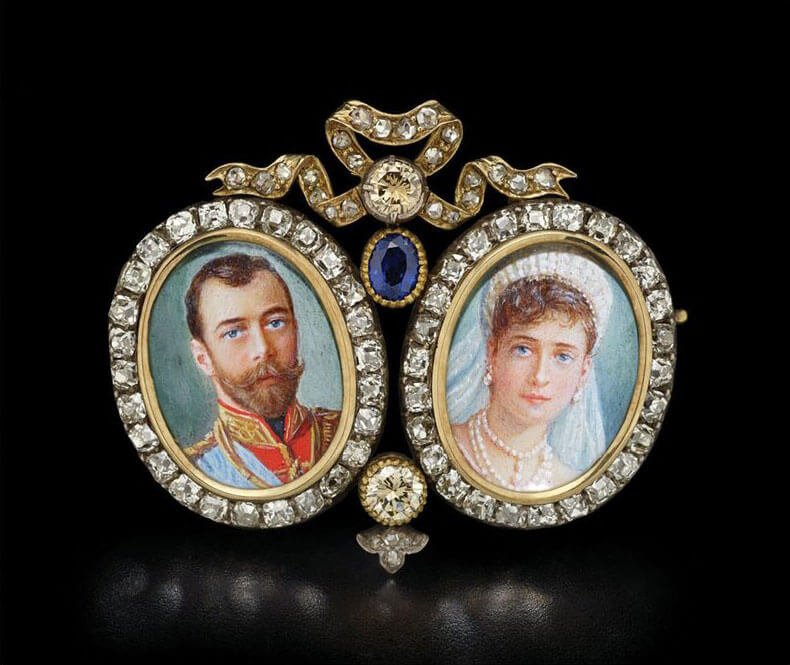 Post acquired her first Fabergé piece in 1927 from the New York branch of Cartier. The 18th-century amethyst quartz box, which had once belonged to Prince Felix Yusupov, bears the marks of Fabergé on its gold lid. It would have interested Post for its precious materials and prestigious history. The second Fabergé item to enter her collection, and the first with an imperial connection, was a nephrite cane handle, set in gold and decorated with enamel, diamonds, and rubies. A note accompanying the piece signed by Grand Duchess Xenia Alexandrovna, the last tsar’s sister, verifies that it once belonged to her. In 1931, Eleanor Barzin, Post’s middle daughter, acquired the Catherine the Great Egg from Hammer Galleries as a birthday gift for her mother. A tribute to French design, the egg aligned with Marjorie’s interest in French 18th-century gold and enameled boxes. When she departed for Moscow with her husband diplomat Joseph E. Davies in 1937, when he was appointed U.S. ambassador to the Soviet Union, Marjorie was already thoroughly acquainted with the history of the Romanovs and their jeweler Fabergé, having acquired these three impressive examples. 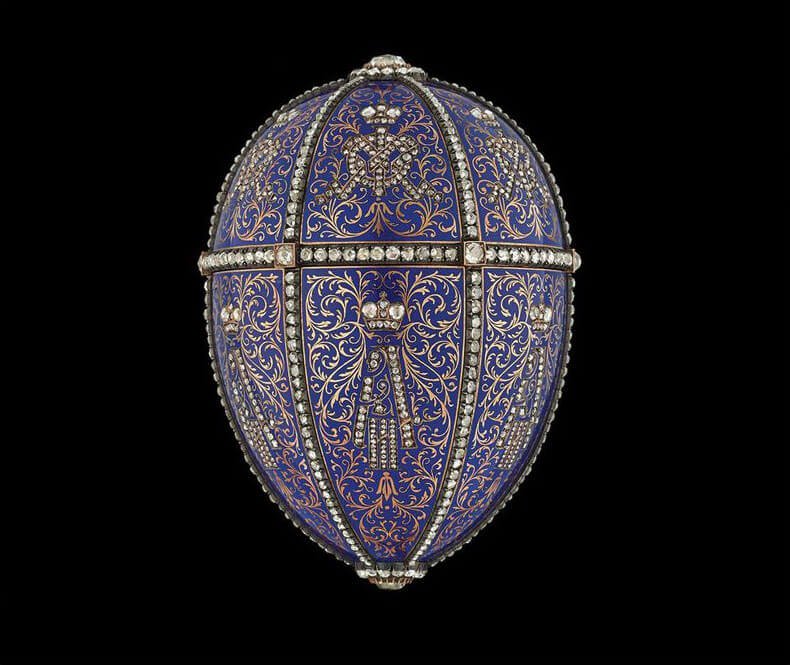 With the possible exception of a rare wood display case with silver mounts, it does not appear that Post purchased any Fabergé objects during her time in the Soviet Union. The discoveries of other Russian treasures she made there, including porcelain, silver, enamel, and liturgical objects, ignited a passion for Russian art, including the works of Fabergé, that would fuel her collecting for the rest of her life.
Post bought Hillwood in 1955 and decided that her home would become a museum, planning displays of her works accordingly and continuing to add to her collection. She acquired Fabergé most assiduously in the 1960s. Among the nearly 90 pieces of Fabergé in Hillwood’s collection, highlights include two imperial Easter eggs; a bowenite clock designed by Fabergé’s chief silversmith, Julius Rappoport, modeled after an 18th-century English clock, which belonged to Nicholas II’s mother, Maria; a carnet, or notebook, with a miniature of the Empress Alexandra, possibly made at the time of her engagement in 1894; and a music box once belonging to the Yusupov family, considered to be one of the finest examples of Fabergé enameling.

Fabergé Rediscovered inspires an array of programs and events throughout the presentation of the exhibition at the legendary Hillwood Estate, Museum & Gardens 4155 Linnean Ave NW Washington, DC.