A Bohemian Paradise Hidden In The Heart of Venice Beach.
If you’ve ever wandered through Venice Beach in Southern California, you’ve likely passed by 2121 Lincoln Blvd., and had no idea the treasure trove that was standing before you. Cleverly tucked away behind the guise of a bohemian storefront, lives a street corner filled with unique artifacts you can’t imagine would even exist. This hideaway offers a world of experiences that make up its own community. Imagine if the spirit of Burning Man came to Los Angeles and took up residence on the corner of Lincoln and Victoria – this is the Venice Love Shack. 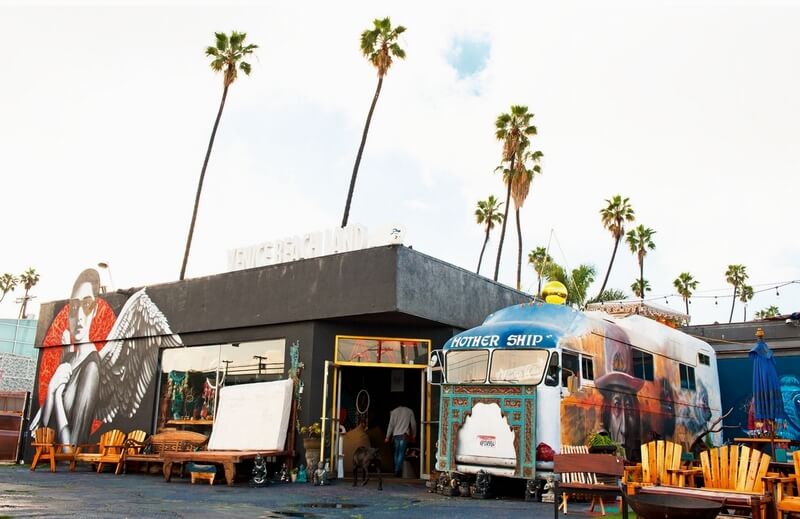 Covering 10,000 square feet, the property encompasses a variety of items to buy and things to do. But, in order to grasp the entirety of what it is now, you first have to go back to where it all started. Udi Levy inherited what began as a bed store over a decade ago, and soon transformed the business’ focus into custom-made bean bag chairs. The inspiration behind the bean bags comes from his mom, who is a midwife in Israel and has been using them there in the childbirth process for years. After the incorporation of the bean bags, the Love Shack evolved into a family affair. Udi’s sister, Leah Yael Levy, who is an artist, joined in the venture. Eventually, so did Udi’s brother, Éitan Levy, whose fine jewelry displays an elite level of craftsmanship that is hard to come by. Éitan uses 18K gold and vibrant gemstones, creating handmade pieces that are beautifully designed and incredibly unique. 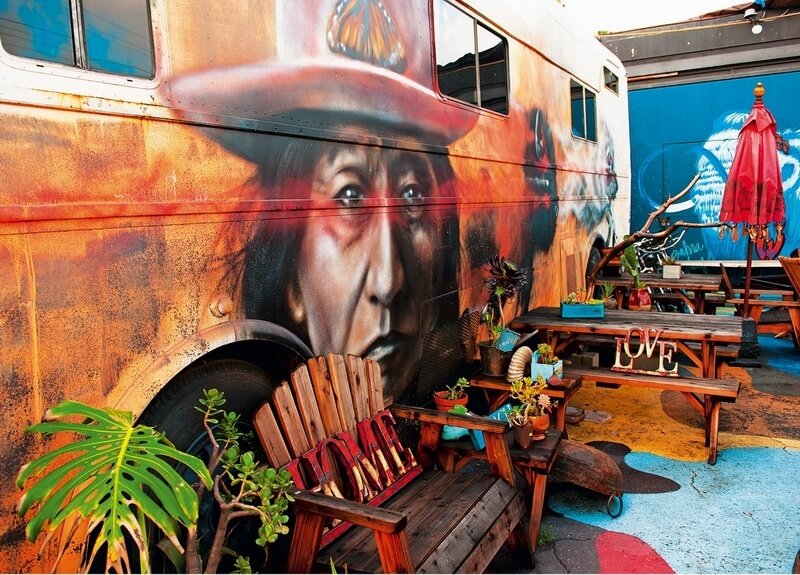 Everything that the Love Shack is today has grown in a way that is completely organic. It was Leah Yael’s artwork that first piqued the interest of other local artists, in turn creating a gallery. Then, there was a friend who needed to move some vinyl out of his mom’s house, which was what created the idea of a music room. Even the hard-to-miss buses were offered to Udi, calling attention to the grounds from those passing by. One bus, two busses, three busses, four; as things moved out, more moved in, and the place kept taking a different shape. Vintage clothes, sewing, haircuts, tattoos: The Love Shack has grown to encompass many aspects. 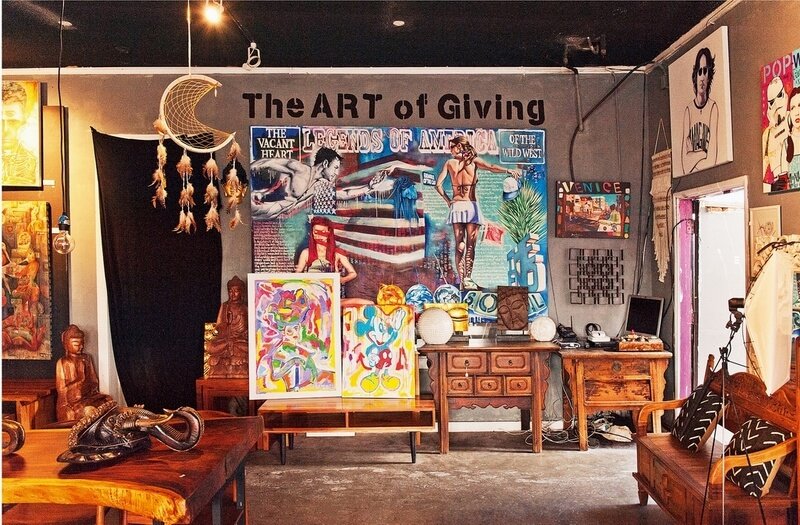 “People just end up here and somehow we always have what they need,” Udi said as he sipped his homemade coffee. The proprietor often invites people in for a cup of his special brew, offering them a place to sit and stay a while. The spot attracts a variety of people. From locals who are down on their luck to A-list celebrities, the Love Shack welcomes all to venture in to embark on their own experience. The obvious draw has even made the location a favorite place to shoot TV shows and music videos.
For the shopper, the grounds are mixed with items that have been both made and found. Some have been brought back from places like India, Nicaragua and Bali, while others are there on consignment. Looking around, you can spot everything from tintypes to dreamcatchers, with prices ranging from $1-$25,000 (if you count the airstream).
These days, Udi is expanding the Venice Love Shack into what he’s calling, “Venice Beach Land.” It includes the gallery, a yoga studio, the mystic disco bus, the bean bag factory, the music room, a place where Éitan makes his jewelry, an Airbnb bus, and a kitchen where they will occasionally hold pop-up dinners; adding more variety to the food trucks that are already out front. Of course, at the heart of it is the Venice Love Shack. From furniture to beyond, it’s filled with an array of vintage items and brand-new creations.
Udi’s latest development is in the area of live entertainment. In essence, he says it’s about creating a feeling of wellness through products, food and experiences. While there’s plenty to buy, patrons can come for breakfast, coffee, and (in the future) beer and wine. You’re welcome to chill on top of the mystic disco bus, where inside you can purchase hats, crystals, incense and more, or hang out in front of the “coffee shop.” Events will hopefully expand to include poetry readings, open mics and acoustic performances. 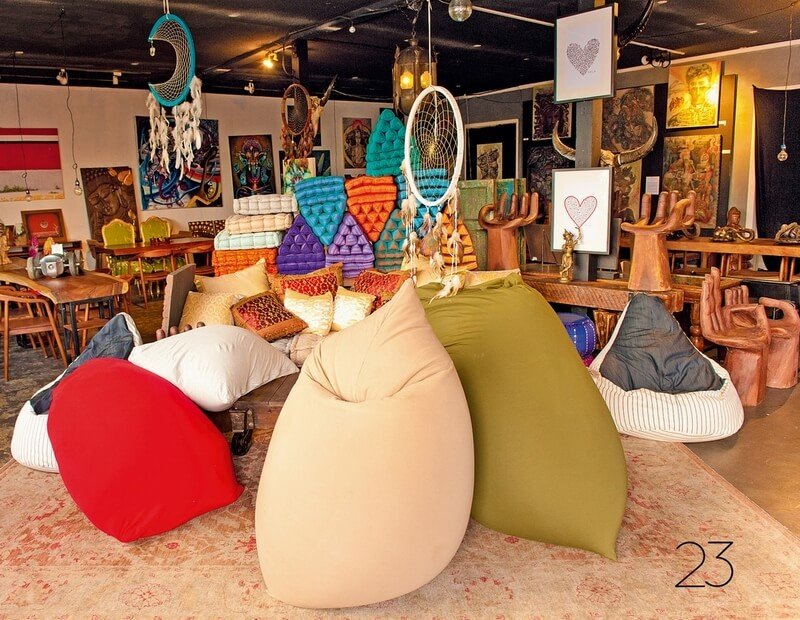 So, what does a typical day look like there? “There’s no such thing,” Udi laughed. “Every day is a new experience where people can come in and just wander. Part of it is discovering the hidden treasures. It’s really all about creating a community of individuals who have unique personalities and bring good vibes.” 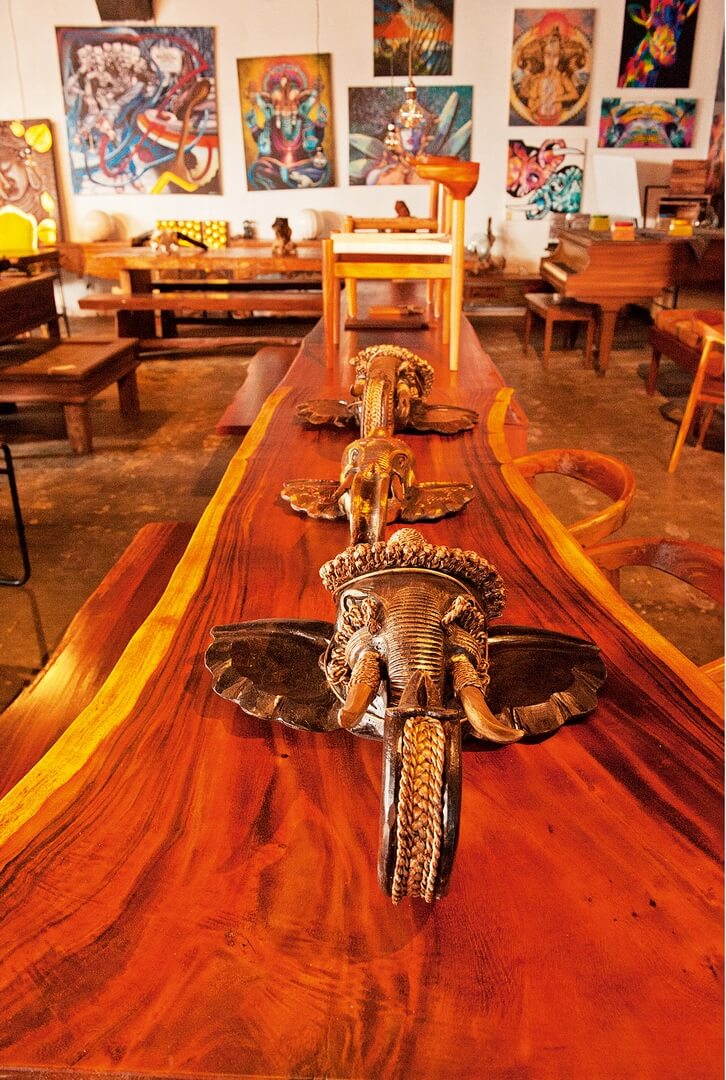 Just walking around the grounds, you might run into Leo, who runs the mystic disco and the yoga studio. There’s also Udi’s right-hand man, Brennan; he’s the house artist. At the helm is Udi, of course, and by his side is his lovable dog, King. Spend some time hanging out and you’ll also come across some regulars. You could just as easily meet a down-and-out Hollywood legend as you could strike up a conversation with a young Venice Beach local. Each has become a part of the day-to-day atmosphere.
The Venice Love Shack has been a longstanding Lincoln Blvd. landmark that has lived through the neighborhood’s many incarnations. It’s a bohemian hodgepodge of endless treasures. Everywhere you turn is something incredible. Go see it for yourself. You’ll likely leave with a cool find, a new friend, and an enchanting story to tell.