The New York premiere of the exhibition Christian Dior: Designer of Dreams traces the groundbreaking history and legacy of the House of Dior and features unique pieces drawn primarily from the Dior archives.
Christian Dior: Designer of Dreams explores the more than seventy-year history of the House of Dior with over two hundred haute couture garments as well as photographs, archival videos, sketches, vintage perfume elements, accessories, and works from the Brooklyn Museum’s collection. Presented in the Museum’s magnificent 20,000-square- foot Beaux-Arts Court, designed by McKim, Mead & White in 1893, Christian Dior: Designer of Dreams is based on major exhibitions held at the Musée des Arts Décoratifs, Paris, in 2017, the Victoria and Albert Museum, London, in 2019, and the Long Museum West Bund, Shanghai, in 2020. 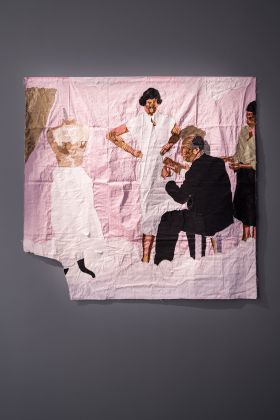 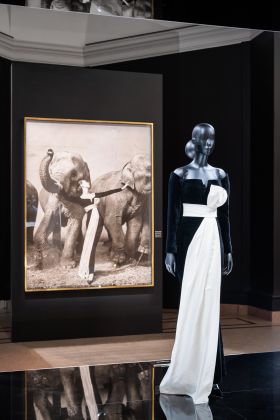 With objects drawn primarily from the Dior archives, the exhibition includes a vast array of haute couture garments that exemplify many of the French couturier’s fabled silhouettes, including the “New Look,” which debuted in 1947, just months before Dior would travel to the United States and open the Christian Dior New York branch. With his designs widely photographed and featured in leading publications, Dior became one of the world’s most recognized names in fashion. The exhibition also brings to life Dior’s many sources of inspiration—from the splendor of flowers and other natural forms to classical and contemporary art—that would influence the designers at the House of Dior for decades. A toile room, a tribute to the Ateliers, and adjacent galleries of couture garments showcase the excellence of Dior’s petites mains. The central atrium of the Beaux-Arts Court has been redesigned as an enchanted garden, and a concluding gallery showcases many celebrated dresses worn by movie stars from Grace Kelly to Jennifer Lawrence.
The presentation also explores the evolution of the House of Dior through the vision of its subsequent artistic directors, from Yves Saint Laurent, whose key influences included the beatniks and the 1953 film The Wild One, to Marc Bohan and his almost thirty-year reign during the revolutionary 1960s and 1970s, as well as the 1980s, when Bohan drew inspiration from Jackson Pollock. Other artistic directors’ creations include Gianfranco Ferré’s architectural designs of the 1990s; John Galliano’s reinventions of the Dior silhouettes inspired by works as diverse as Egyptian sculpture and paintings by Giovanni Boldini; Raf Simons’s own minimalist take on Dior’s original designs; and pieces by the current and first female creative director of Dior women’s collections, Maria Grazia Chiuri, who has brought a new vision to the historic fashion house. Notably, in 2016 Chiuri debuted T-shirts emblazoned with Chimamanda Ngozi Adichie!s statement “We Should All Be Feminists” and has committed to having the official images of each new collection photographed by women. As the nation’s only major museum to have galleries and a collection dedicated to feminist art—the Sackler Center—the Brooklyn Museum is uniquely suited to an exploration of Chiuri’s groundbreaking initiatives to champion women creatives. 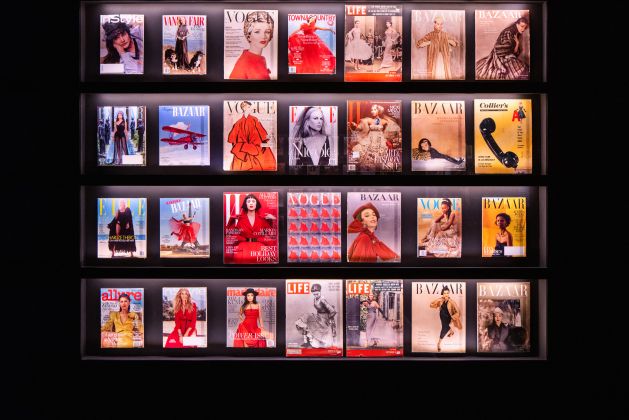 Dior: The company was founded in 1946 by French fashion designer Christian Dior, who was originally from Normandy. Although his parents had hopes of him becoming a diplomat, Dior was artistically inclined and began to sell his sketches on the street to make pocket money. He founded the house of Christian Dior on December 16, 1946 at 30 Avenue Montaigne Paris, backed by Marcel Boussac, a cotton-fabric magnate. Officially, the house of Dior considers 1947 to be the year of conception as that is when Dior showed his first collection. On February 12, 1947, Dior showed his debut collection, presenting the 90 different looks. Named “Corolle” and “Huit”, the lines were quickly christened the “New Look”, a phrase coined by US *Harper’s Bazaar * magazine editor Carmel Snow. The look consisted of a calf-length, full skirt, a cinched waist, and fuller bust than had been seen since the turn of the century. A rebuttal to post-war fabric restrictions – the average dress used 20 yards of fabric – the look received some criticism upon release.
In 1949, Dior was the first couturier to arrange licensed production of his designs. Having realized the importance of the complete look – and that the New Look could not be successfully achieved without the correct Dior shoes, gloves, and hat – Dior, together with business partner Jacques Rouët, licensed his name to a range of luxury accessories. Furs, stockings, ties, and perfume were also manufactured in regional centers across the world, spreading his brand name quickly around the globe. Although this move was heavily criticized by the French Chamber of Couture – who denounced the move as cheapening the haute couture industry – licensing became a profitable move for Dior and the atelier’s lesson was followed by nearly all the period’s fashion houses. 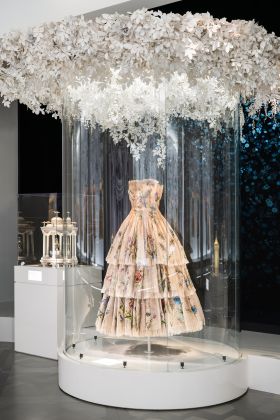 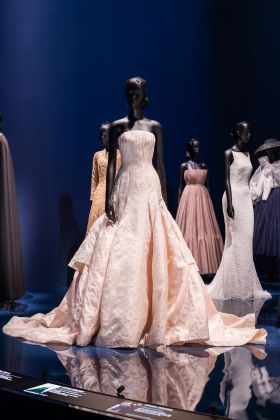 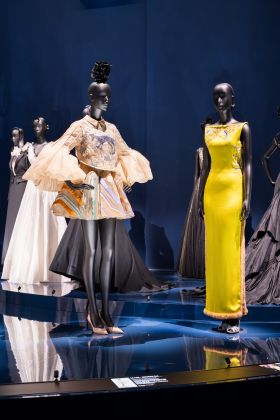 The opulence of his designs contrasted with the grim post-war reality of Europe and helped re-establish Paris as the joyful fashion capital it had once been. The house was inundated with orders and world-famous stars such as Rita Hayworth and Margot Fonteyn bought and wore pieces, raising Dior’s profile significantly. Dior was even invited to stage a private presentation of the collection for the British Royal Family – although King George V reportedly forbade the young princesses, Elizabeth, and Margaret, from wearing the New Look in case it set a bad example at a time when rationing was still in force.
Florence Müller, Avenir Foundation Curator of Textile Art and Fashion, Denver Art Museum, says, “As early as 1947, with his celebrated ‘New Look’ collection, Christian
Dior transformed his sudden name recognition into the international expansion of his House, becoming a precursor of contemporary globalized fashion. The opening of the first New York branch, in 1948, was a prelude to this worldwide fame. 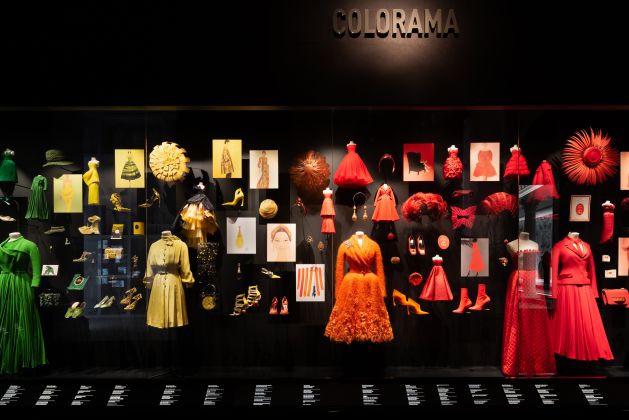 “The Brooklyn Museum has a long record of recognizing important contributions in the history of fashion design, from The Story of Silk (1934) to the groundbreaking Of Men Only (1976) to the recent Pierre Cardin: Future Fashion (2019) and now Christian Dior: Designer of Dreams. Each exemplifies the power of fashion to influence and shift visual culture at large,” says Matthew Yokobosky, Senior Curator of Fashion and Material Culture, Brooklyn Museum. “Today, the work of Maria Grazia Chiuri has reshaped the Dior dream for a new generation, with a worldview that brings with it inclusivity and respect as key philosophical directives. We couldn’t be more excited to present these innovative, beguiling—and technically outstanding—designs to our audiences.” 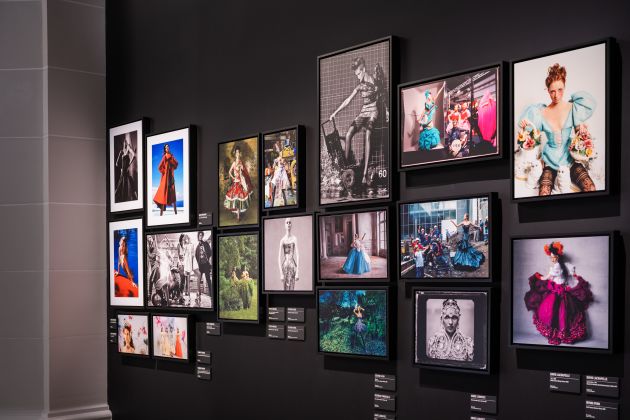 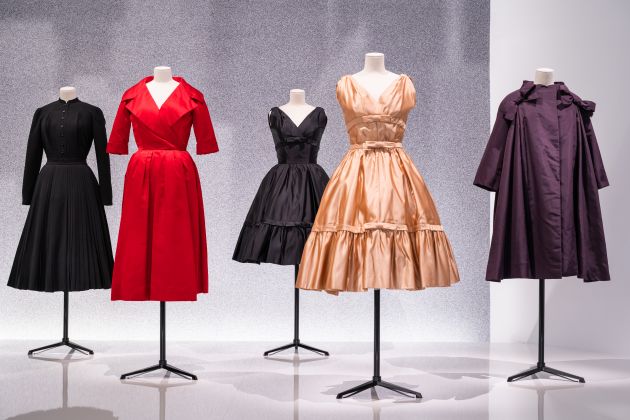