Jack Johnson and Jack Gilinsky (better known as Jack & Jack) have been finishing each other’s sentences since kindergarten. Oftentimes, they sound so much alike, it can be hard to decipher between the two. But, just like with their music, the more you listen, their personalities shine through; highlighting what makes them both similar, and unique.

The duo’s recent success has seen them soar to the top in what seems like the blink of an eye. Their hit single “Beg” (written by singer-songwriter Lauv) broke them into the Top 40, while “Rise,” (made in collaboration with multiplatinum-artist and producer Jonas Blue) has officially catapulted them into superstardom.

Jack & Jack’s earlier EPs, 2015’s Calibraska and 2017’s GONE, have led fans to this moment – where the pop-rap duo’s evolution as musicians is on full display for the world to see. October 2018 saw the release of the single, “No One Compares To You” (via Island Records), which Jack & Jack detailed during their recent interview with INLOVE.

The pair started off by recounting how they made their first song together in high school. The two stuck it out and eventually left Omaha for LA, prompting a whole world of changes – their music, of course, growing as they did. The more time they spent in the studio, the more they learned about their tones – and themselves.

“We were 17 when we moved out here and now we’re 22,” Gilinsky pointed out. “Our life experience has definitely affected the way we think about things in general and that, in turn, affects our music.” 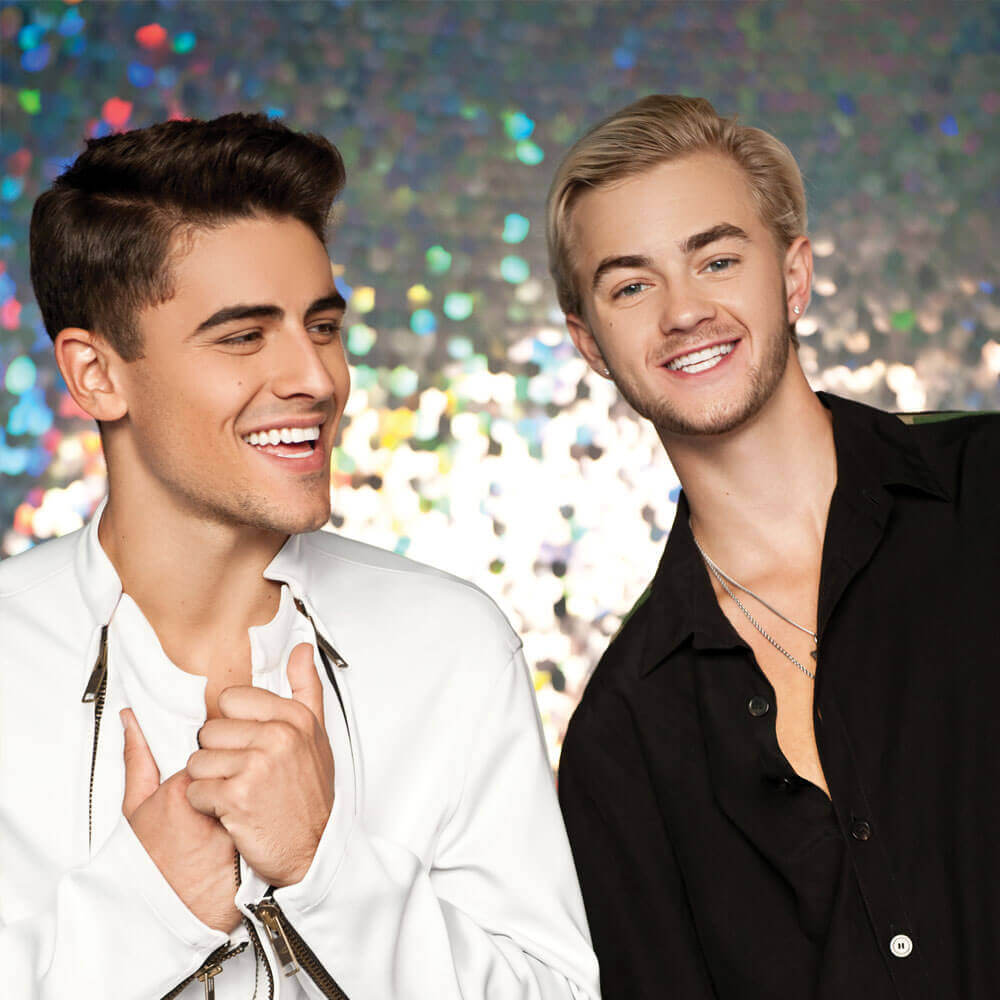 Sari: You guys are friends first and foremost. Tell me, what’s the secret to a lasting friendship?
Jack J: I really think it’s just about making sure you’re always connected with that person. Our occupation really goes hand in hand with seeing each other every single day. So, we’re friends by default at this point [laughs]. As far back as my memory goes, Jack was there.
Jack G: It’s a cool thing. We’ve known each other for 18 years. We get along and our lives just happened to take us down these two roads that we get to walk side by side. Part of that is how we grew up. In elementary school, we were always showing each other things that we thought were funny.
Jack J: We were so impressionable. I feel like we were the only ones we had influencing each other, for the most part. Jack and I have developed our sense of humor hand in hand. We’ll spend hours doing things that are just funny to us.

Sari: What’s been your most exciting moment in music so far?
Jack G: We’ve had some amazing times in the past five years; going around the world, touring and seeing fans and stuff. I don’t think I can put my finger on one thing but when you said that, obviously I’m thinking about recent times. We’ve had a lot of success with this song called “Rise.” I think specifically, at Capital’s Summertime Ball [in London] that was such an amazing moment standing in front of that many people. Singing the song and seeing those people sing it back to you; they actually know it and they love the song. It was definitely a dream come true.
Jack J: I think the song itself, in general, was just such an exciting moment. We got to do so many things this summer. But definitely, yeah like Jack said, that Wembley Stadium experience [at the Summertime Ball], that was amazing.

Sari: You’ve already collaborated with some great talents. Who’s next on your list?
Jack G: That’s tough to say. We can only hope our music continues to take us to places that allow us to get into the room with such talented people. We have so many hopes and dreams.
Jack J: I think there’s so much young talent out there who are so cool. Jack and I are huge fans of Anderson Paak. We love his soulful tone. There’s something about him. I’d definitely love to get in the room with him, he’s very creative.

Sari: Let’s talk about “No One Compares To You.”
Jack J: The song, “No One Compares To You,” it makes me want to dance. The thing I like about it is that the lyrics are almost a little dark. The song is about how no one compares to this past love that you had – or this past relationship – and you’re kind of trying to fill the void. But, then you realize nobody stacks up to the way they made you feel. No one can emulate that, so you just long for this person and that’s where the title comes from – “No One Compares To You.” I think it has a universal message. Music always helps people cope with situations. This is one of those songs.
Jack G: I think off the top, if you listen to it without digging into it, it’s just a nice song. It has a positive vibe. But then, if you’re a real fan, you’re going to want to really listen to all the lyrics and know what the song’s about. Like Johnson said, it is kind of dark but it doesn’t make anyone feel depressed. I want everyone to feel like they’re not alone. Sometimes, you feel like you’re the only person who’s going through a tough time. Everyone goes through that, so I hope even though it’s a little bit dark lyrically, there’s a positive vibe. 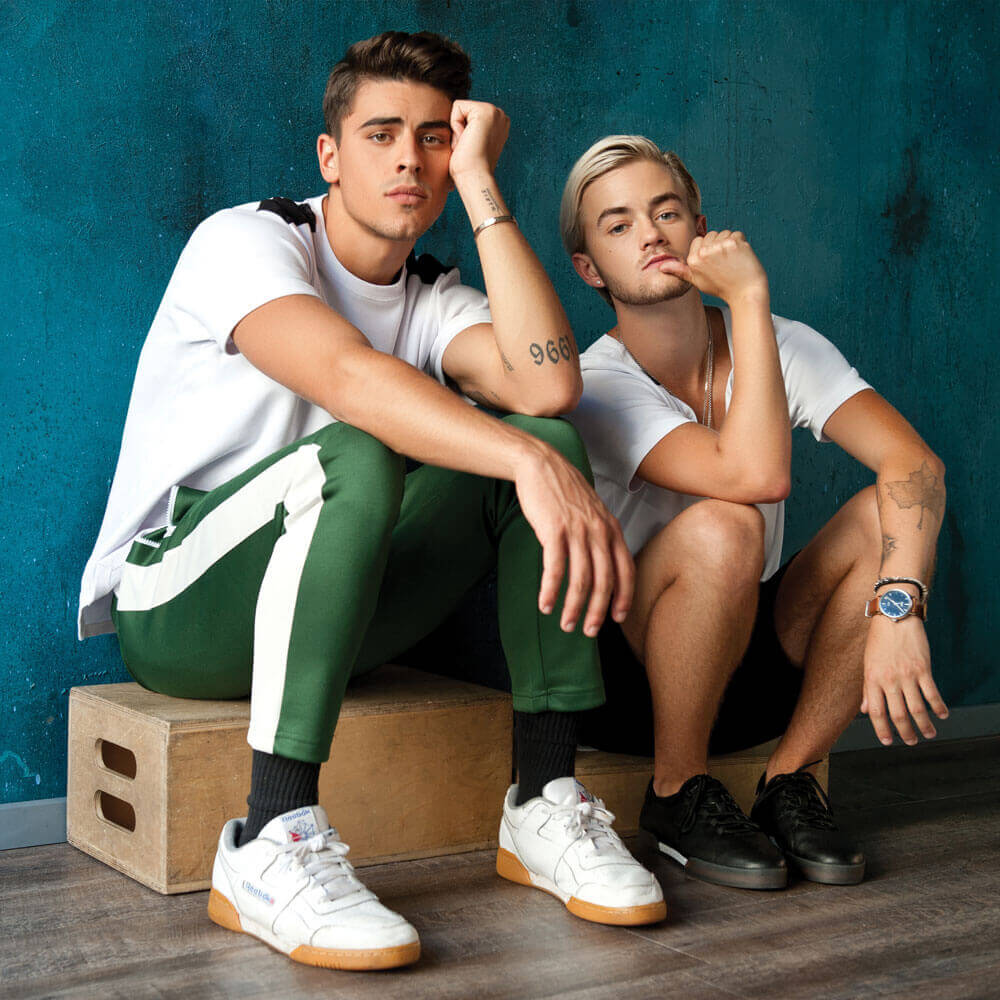 Sari: Now, since we are INLOVE magazine, I want to get your opinions on love. Describe for me your love of each of these things…

Love of comedy
Jack J: Who doesn’t like to make someone laugh? I think that’s one of the most gratifying feelings. On the flip side, we’ll spend countless hours watching people performing stand-up. There’s no form of therapy like laughter.
Jack G: Comedy is something that is deeply embedded in my DNA. I just love comedy because it makes you happy. It’s as simple as that, really.

Love of food
Jack J: Specifically, I think of my grandmother’s lasagna. That’s what makes me think of my love of food. There’s nothing like a home-cooked meal. When I go back to Omaha, yeah, let’s just say my love for food is never-ending.
Jack G: Honestly, I wish I didn’t have to eat [laughs]. I don’t mean I want to be anorexic by any means. I’m just saying eating is a chore, but I love food, at the same time. It’s a love/hate relationship.

Love of style
Jack J: I love when people express their individuality through their style. It’s an amazing way for people to show who they are. When somebody wears something that a lot of people are judging, in the media, it usually makes me like it more. I like when people take risks. I think style is important to show your character.
Jack G: When it comes to style, I like comfortable stuff. Some people say sometimes you’ve got to be uncomfortable – which is true I guess. I really appreciate a really fly outfit, but I don’t go out of my way. Sometimes I just like to play it safe.

Love and relationships
Jack J: Without relationships, none of us would be here – technically speaking. Relationships keep everyone together – Talking to other people, gaining experiences, changing your perspective because of a relationship; learning more about yourself because of a relationship. I don’t think you could ever figure out who you without having them.
Jack G: Love is the most important thing. If everybody just loved each other, then nothing would be bad. Love is very powerful and very important. You have relationships with people – not only just a relationship with a significant other, but friendships, and your family. Relationships are the key to happiness.
Jack J: The world is a very hate-filled place and the only way we should be combatting hate is with love.
Jack G: Try to be as positive as possible and always be nice; that’s the best advice I could give.

In the future, you can expect more music and come this spring, more touring, which more importantly means – more Jack & Jack.