Whether you know her as Summer Hathaway from Nickelodeon’s Emmy-nominated television series “School of Rock,” or remember her as McKenna Brooks from “An American Girl: McKenna Shoots for the Stars,” Jade Pettyjohn brings that same light, love, and magic to every role she takes on.
0 0
By Sari Cohen June 19, 2020

Whether you know her as Summer Hathaway from Nickelodeon’s Emmy-nominated television series “School of Rock,” or remember her as McKenna Brooks from “An American Girl: McKenna Shoots for the Stars,” Jade Pettyjohn brings that same light, love, and magic to every role she takes on.

The past couple of years have been good for the 19-year-old actress. Coming off of the success of 2018’s “Destroyer” (where she played Nicole Kidman’s daughter) and “Trial by Fire” (starring alongside Laura Dern), she rolled into 2019, taking the year by storm, appearing in HBO’s long-awaited “Deadwood” film.

“I had always gravitated towards acting ever since I was a small child,” Pettyjohn tells INLOVE Magazine. “I love that it gives me an understanding of how another person sees the world. I’ve been lucky to have worked on amazing projects with brilliant artists who share the same opinion, where it’s just about telling stories and trying to understand the world that we live in.” 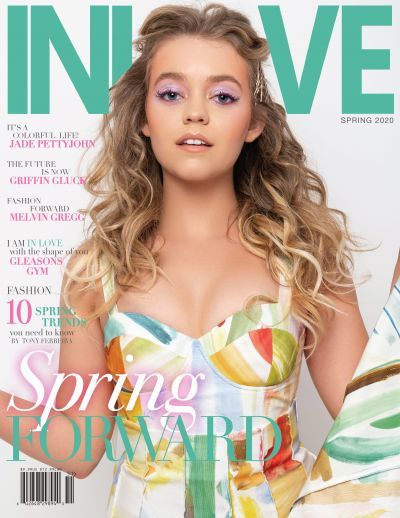 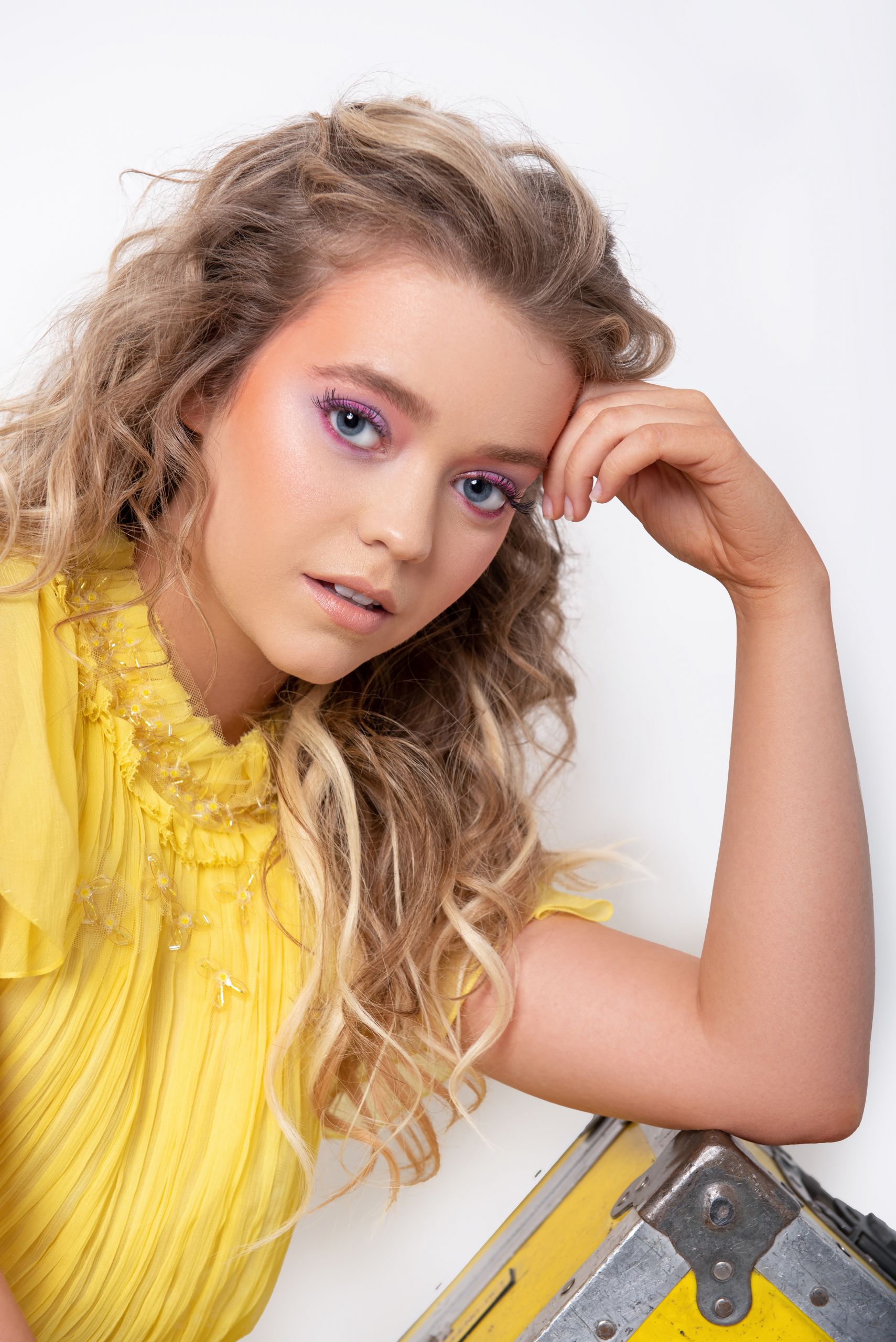 Sari: Your beauty shines both on-screen and off, whether it’s through a character or on social media. How would you define beauty?

Sari: Part of feeling beautiful is about nourishing the spirit. How do you maintain that kind of spiritual self-care with such a busy work schedule? And what kind of tips can you leave with readers when it comes to self-care?

JP: I love my job, so even though my career is busy, I’m also making art. I feel like that is a beautiful form of self-expression. The greatest tip I could give would be to make some sort of art, or find some form of self-expression; whether that’s painting, or playing music, or dancing, or going off with your friends and trying to make a movie, anything that nourishes the spirit makes you feel great. I found that art has been so therapeutic in that sense. Also, it’s about spending time with your friends and your family. Life is about balance. That’s a really good thing to practice.

Sari: You’re now stepping into the character of Lexie Richardson in Hulu’s “Little Fires Everywhere.” She’s described as “popular, smart, bossy, and driven.” What kind of lessons do you hope your character teaches others?

JP: It’s an ungraceful, rocky path that my character takes. I think the most important thing is being able to see how you’ve affected another human and being able to look at that side of yourself, even if it’s not comfortable to look at. There’s a lot of power in admitting that you were wrong, or seeing how you’ve done something wrong, and taking responsibility for your actions towards others. Being able to do that means you have the ability to become a better human being. As uncomfortable as it is, I think it’s vital. My character is kind of a cautionary tale.

Sari: In the new show, you’re playing Reese Witherspoon’s daughter. How has Reese inspired you to be a better version of yourself?

JP: She’s so kind, and so driven and incredibly intelligent. She’s all of these qualities of what it means to be a fantastic filmmaker and actress and leader. She made everyone feel so comfortable and safe to create. She’s also just so brilliant, which goes without saying – she’s Reese Witherspoon, you know. She’s just such a beautiful person. Every time she talked to anyone on set, you couldn’t help but feel warm. When she was performing, and you were performing with her, you felt like you were performing WITH her, and that was so important. She’s a very generous human being. She’s nothing but inspiring.

Sari: Apart from Reese, you’ve worked with a number of strong female actresses like Nicole Kidman, Laura Dern, and Kerry Washington. What lessons did they teach you, during the time that you were working with them, that you still carry with you today?

JP: All of these wonderful female filmmakers and actors that I’ve worked with have taught me so many things, and they’re all different individuals. I learned something new from each one. But the common denominator that I’ve gotten from these women is that they’re not afraid to take up space. They’re confident, kind, and generous to others, but they also don’t allow themselves to be walked over. They create something beautiful, and they allow others to create with them. They know what it means to be confident and unafraid, to have courage, and to treat other people with kindness. Kerry Washington is one of the sweetest people I’ve ever worked with, as well as Laura Dern, and Nicole Kidman. All of these women are just so beautiful. 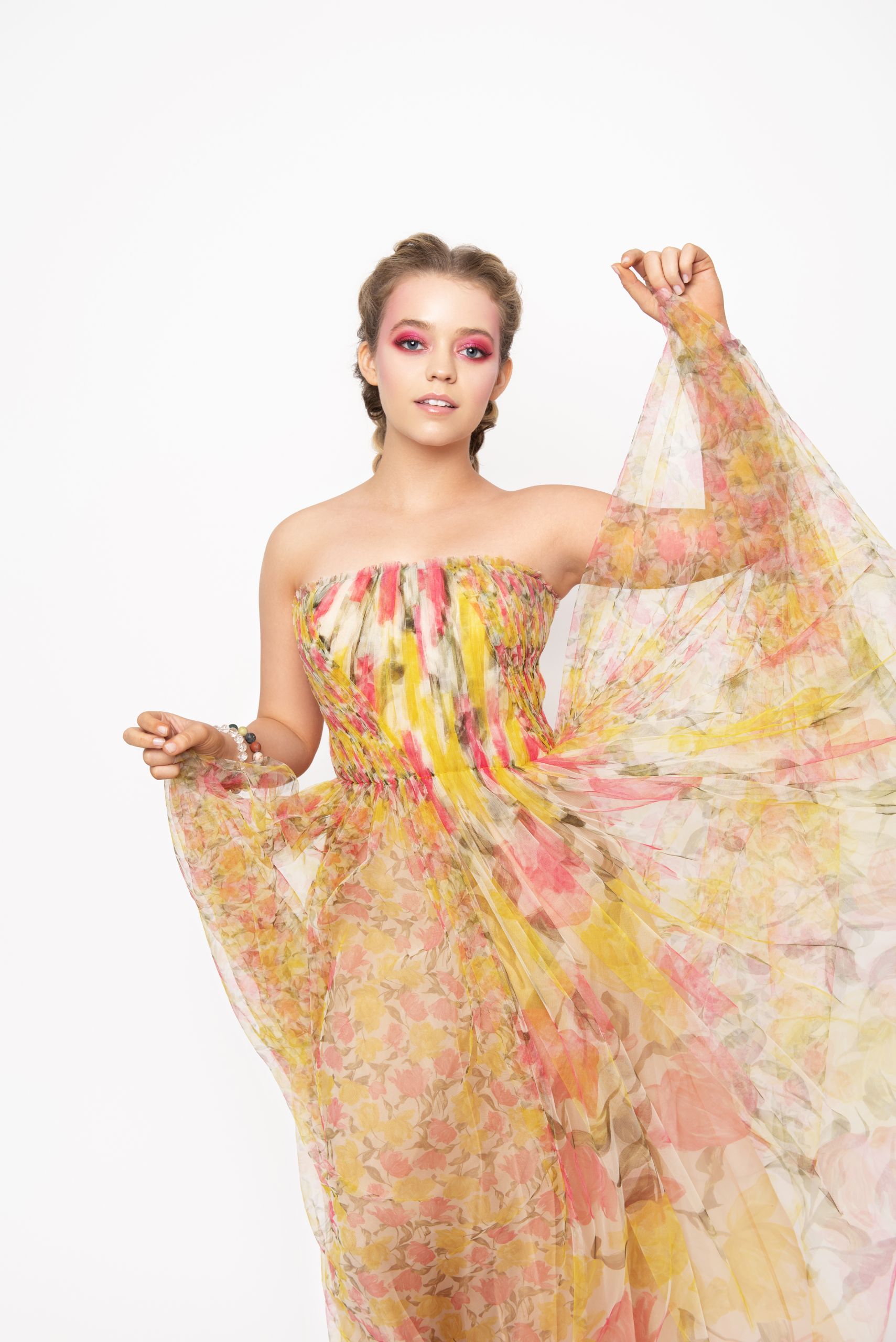 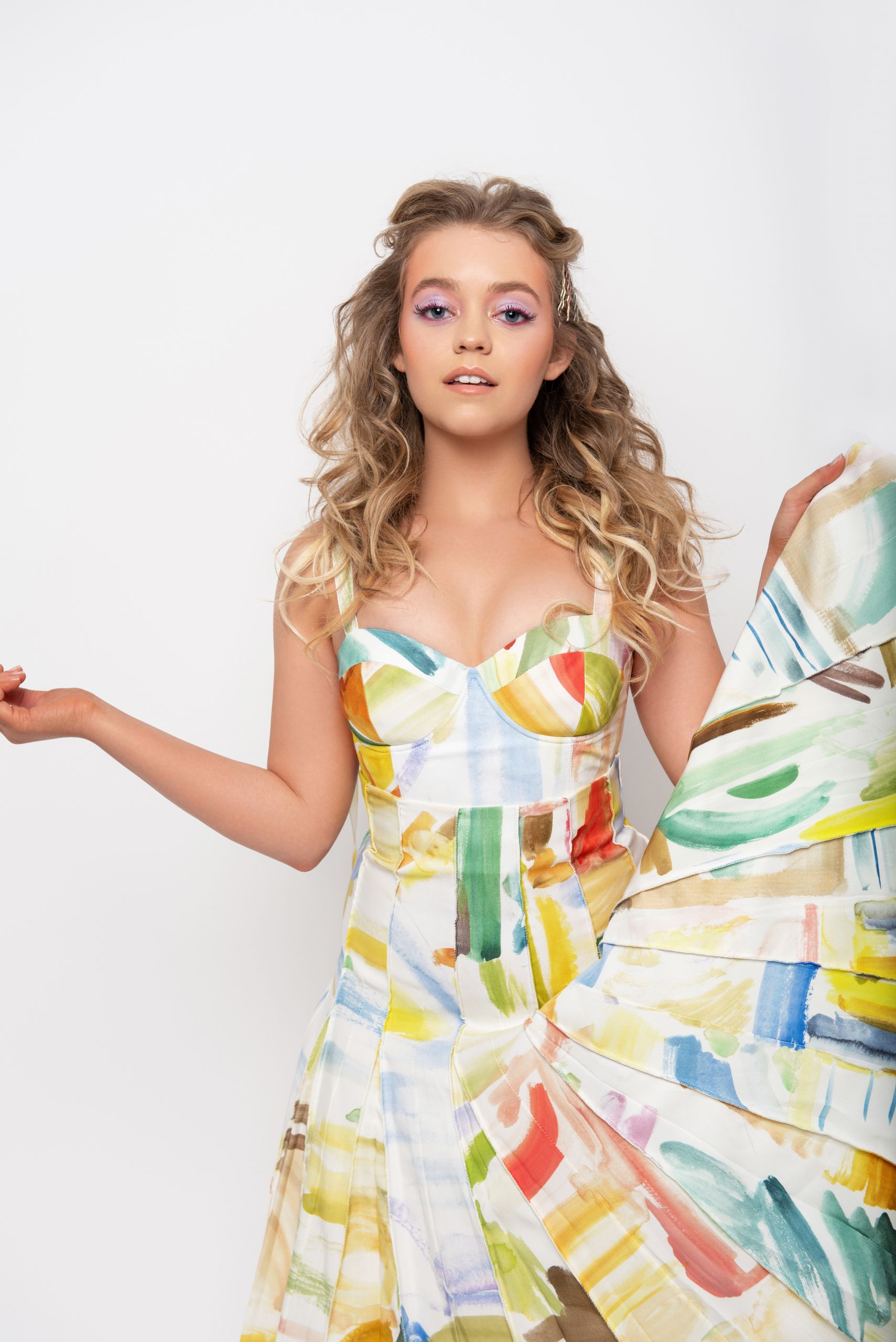 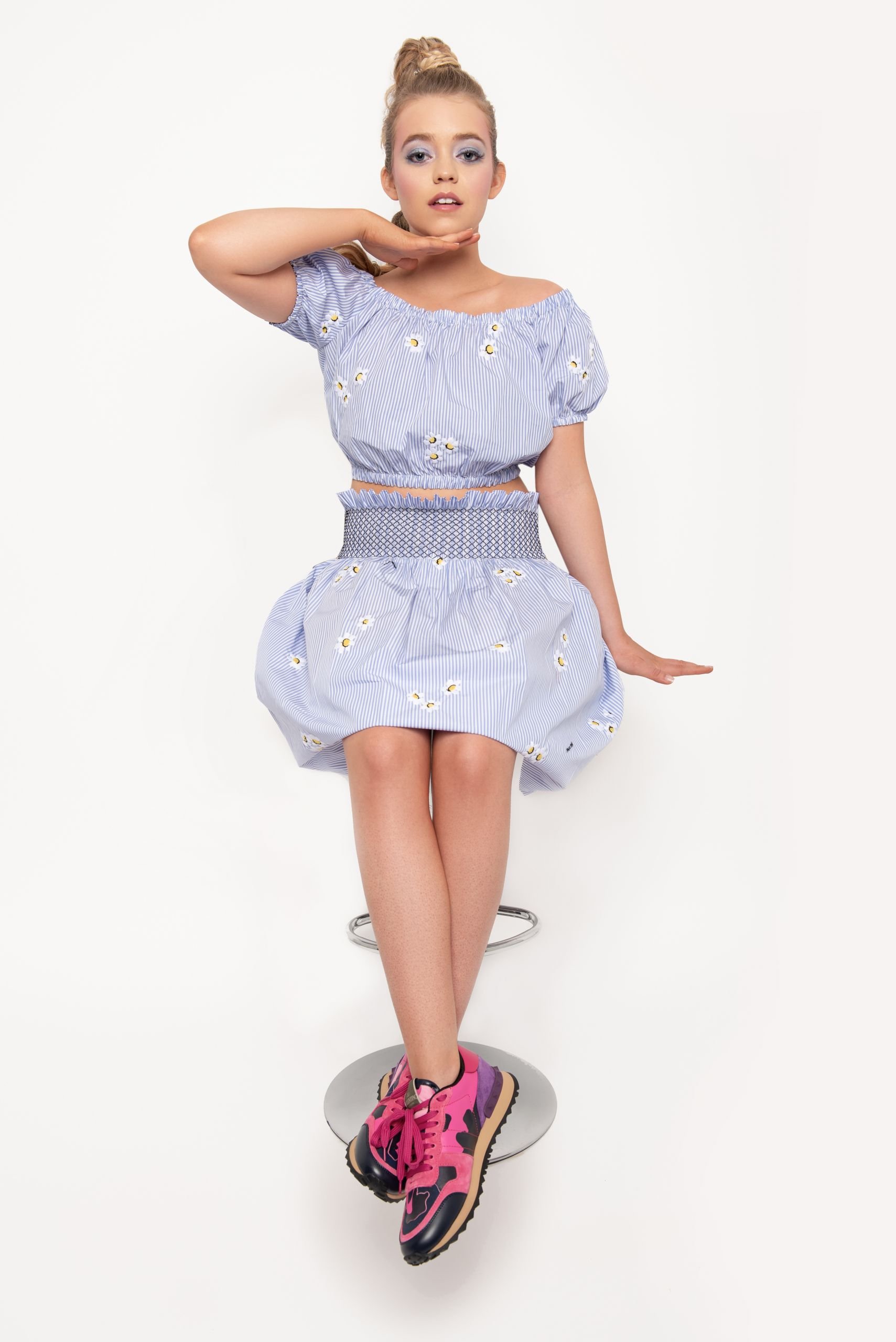 ‘I love playing women who are real and raw and different from who I am.’

Sari: What kind of characters do you hope to play as you move forward in your career, and do you ever see yourself branching off into other areas?

JP: I love chasing great stories. I love playing women who are real and raw and different from how I am. I like the idea of representing women that are not like me at all. I find that so interesting. I’ve been really lucky to have done that recently from “Destroyer” to “Deadwood” to “Little Fires,” they’re all from very different walks of life. So, I want to continue to do that; to play roles that I can immerse myself in. I have a love for filmmaking as a whole, so directing, writing, producing – I definitely want to expand my ability to create in this industry.

Sari: What kind of example do you hope to set for young women when it comes to feeling beautiful?

JP: I think that feeling beautiful comes from so many different aspects of life. I think that a lot of young women should feel open to experience living a colorful life, to go out and live, to not be afraid of how you look. It’s important to give yourself a break because there’s so much more to who you are than what you look like. You should embrace everything about yourself and surround yourself with people who make you feel good about yourself. I think that’s also so important. If you’ve got somebody in your life that’s continuously making you feel inferior, you don’t need to grant them your time or your energy at all. Live your life, and feel good about yourself. Surround yourself with people that care about you, because there are so many people that do.

“I’m in love with the life that I’m living right now,” Pettyjohn adds. “My art, my family, my friends, I feel like it takes a considerable amount of courage to fall in love with life. It takes courage to take that extra leap and really go after what you want. People should chase that feeling, those butterflies in your stomach. It’s like jumping off into this great abyss and seeing what can come from that. Beautiful things happen when you fall in love.”