“It happened kind of accidentally,” Alex Lange tells INLOVE about how he found himself in the entertainment industry. “Originally, I started with a passion for photography and film.
1 0
By Sari Cohen November 22, 2019

“It happened kind of accidentally,” Alex Lange tells INLOVE about how he found himself in the entertainment industry. “Originally, I started with a passion for photography and film. I started taking pictures and making videos in my spare time in high school, and thanks to that hobby, I started making quite a bit of friends who were working in entertainment. Being constantly surrounded by it, I started learning more about filmmaking, acting, producing, digital marketing, and fell in love with the industry.”

Sari: How do you think your experiences growing up have affected you creatively?

Alex Lange: I’m originally French and South African, and my family moved around quite a bit when I was growing up. I was born in Paris, eventually moved to London, and my family finally settled in Los Angeles when I was 13 years old. I think that the exposure to different languages, cultures, and countries that I had growing up remains an inspiration to me and my work. I still travel to both of my hometowns every year, and I learn something new about myself every time.

Sari: Can you name a moment as an actor that changed your life?

AL: I’d have to say getting to work with Marcia Gay Harden. I worked with her on season 3 of “Code Black.” It was my first-ever TV show, and I was definitely nervous for my scenes. She gave me some advice that I will never forget and was amazingly patient and kind. Getting to share such special moments with someone so talented is something I’ll never forget.

Sari: I understand that you’re trying your hand at producing. What can you tell me about that?

AL: When I was 11 years old, I was already creating short films and spy movies with my brother for fun, so I think that producing – even if I didn’t know it back then – was always a dream of mine. There’s something so cool about being a part of a project from start to finish, which is something that you don’t really get to do as an actor. Most of the time, you join the project once it’s already been written and financed. Consequently, you don’t really get much creative control over the storyline. So, for the last year or so, I decided to work on producing my own stories and projects. So far, I’ve released a short film based on Pink Floyd’s “Money,” and I’m currently working with my brother Matthieu Lange on submitting “L.I.A.M.” [It’s] a film that he directed and that I produced, alongside Cameron Michienzi, for film festivals. 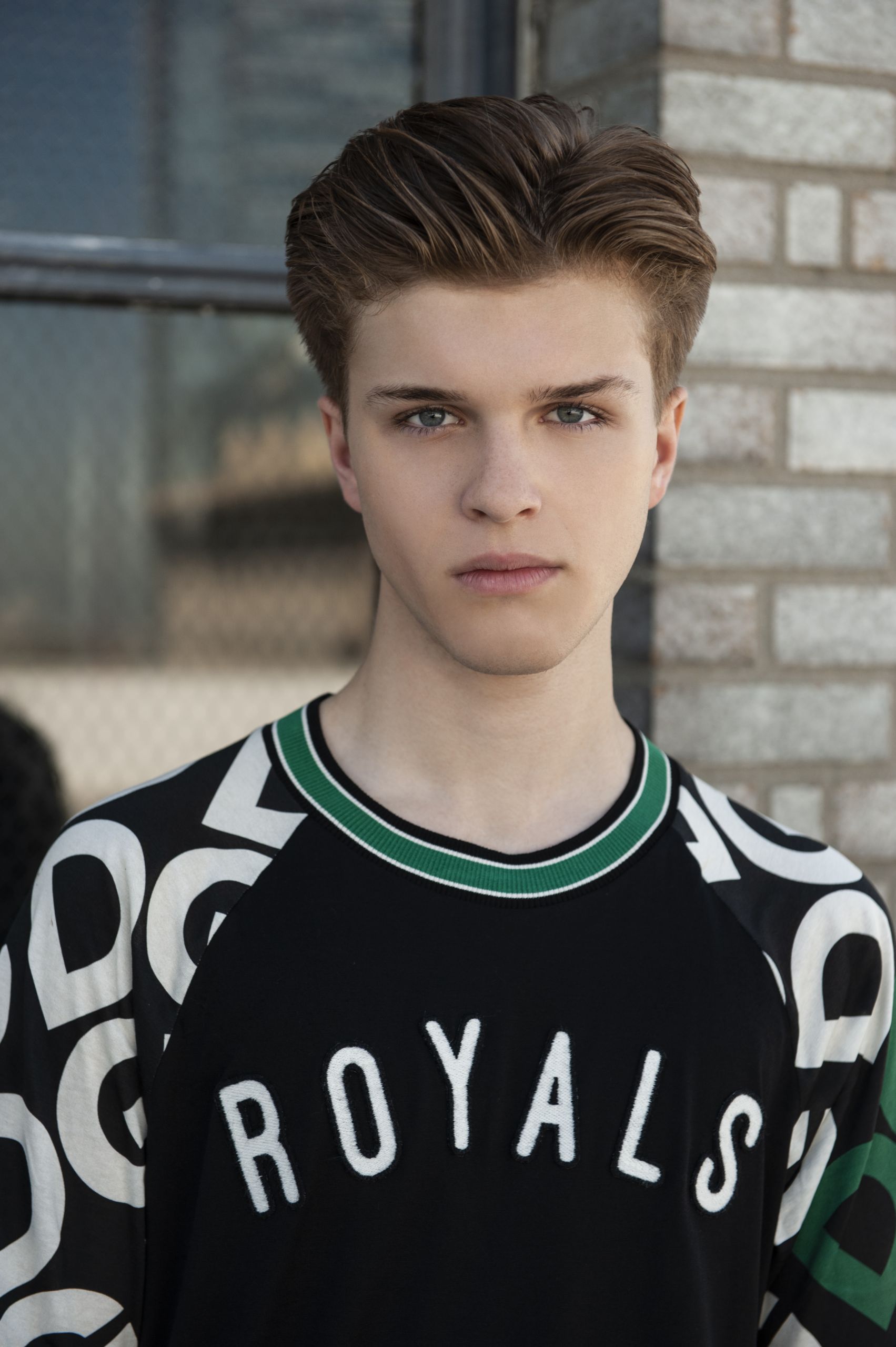 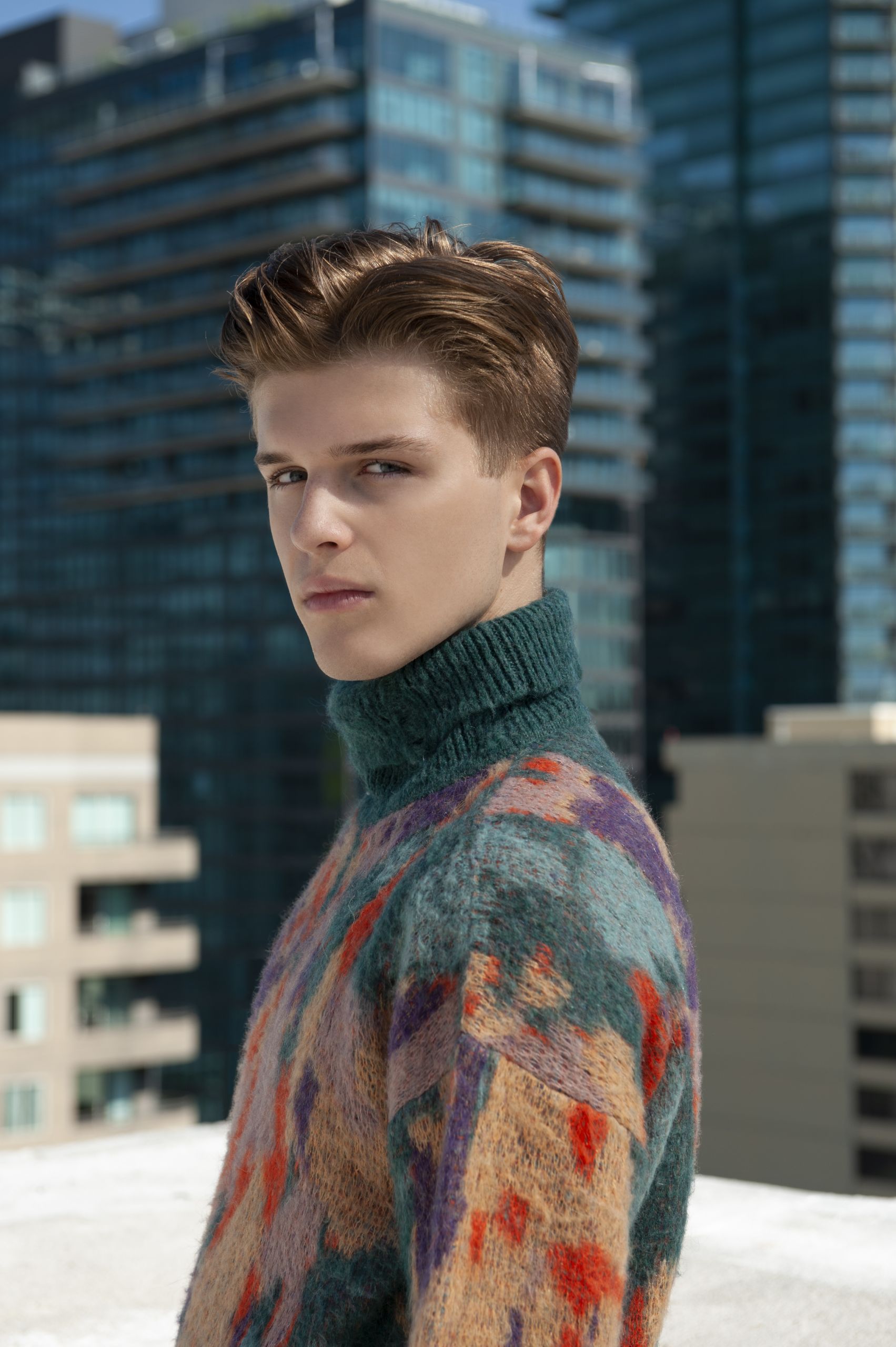 “It happened kind of accidentally,” Alex Lange tell I love about how he found himself in the entertainment industry.

inlove magazine were kind enough to lend me twenty pages of their winter issue to talk about work, fashion, and family. if you wanna learn a little more about me, swipe to the right! available worldwide ✌🏼🖤

Sari: Are there other creative areas that you want to branch off into?

AL: Right now, the biggest focus of mine is on producing and acting, but I’m also interested in the world of fashion. I recently signed with Ford Models, who have been incredible at introducing me to this whole new branch of entertainment that I knew nothing about.

Sari: You were born in Paris and raised in London. Now you live in L.A. How did those surroundings influence your sense of style?

AL: I think that a lot of my style is European influenced. I’ve always loved Polos, striped shirts, and I even had a flat cap phase. Although, I will say that living in Los Angeles has given me a soft spot for sweatpants and sneakers as well.

I’m originally French and South African, and my family moved around quite a bit when I was growing up.

Sari: Who is your style icon?

AL: I’d have to say A$AP Rocky if we were talking about celebrities, but I also consider many film characters to be style icons. Baz Luhrmann’s “Romeo,” and Tyler Durden in “Fight Club,” [to name a couple].

Sari: What type of style are you usually drawn to?

AL: Anything. I love trying new things and taking risks.

Sari: Do you have a favorite label?

AL: Not specifically, but I do wear a lot of AllSaints and Tommy Hilfiger.

Sari: Are there any fashion trends that you follow?

AL: I don’t know if I’d call it a “fashion trend,” but I have been collecting Nike’s Air Jordan 1 shoes for the last couple of years. There are dozens of different collaborations, colors, and styles to choose from. What attracts me the most to that specific shoe is the timeless design. They’ve been around for years, and I believe they will continue to be.

Sari: What do you think it is about certain looks that spark trends?

AL: Risks! Look at Billie Eilish. She did something completely different, yet it was authentic, and it was fun, so of course, the trends follow.

Sari: What look, trend or style are you currently in love with at the moment?

AL: [In the] winter, I’m all about the sneaker/sweatpants/hoodie combo. 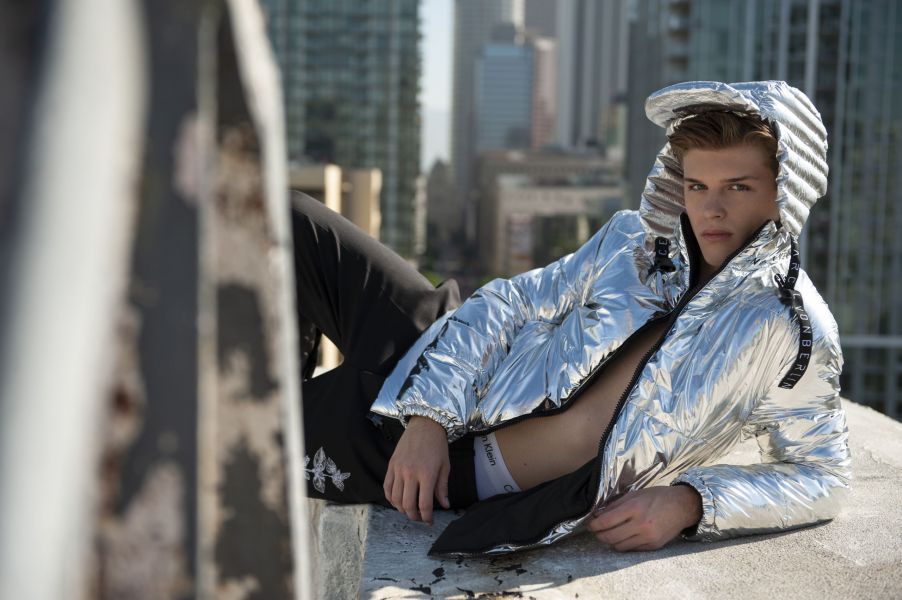 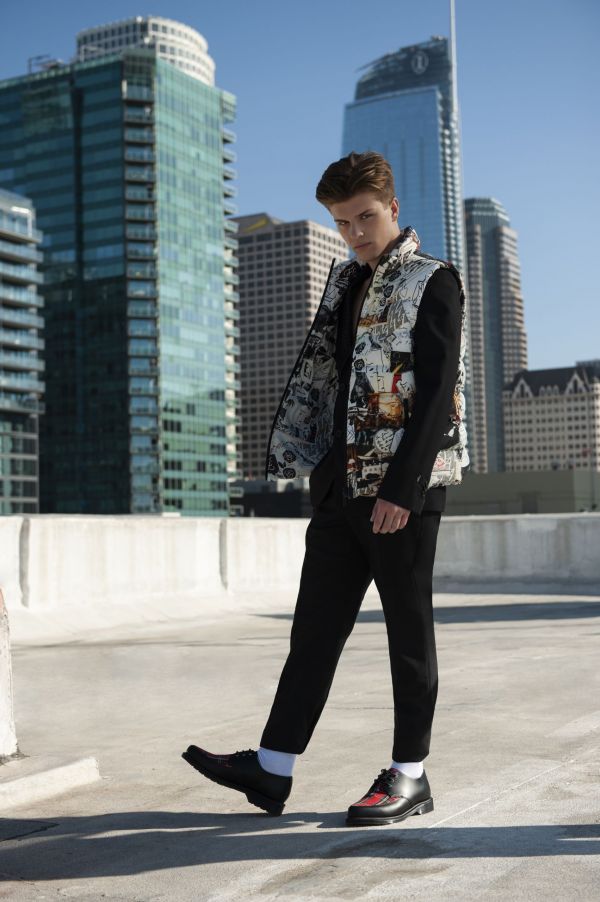 AL: I really wish I had a cooler answer for this, but I usually just hop out of the shower and let my hair be. If necessary, I’ll put in a small amount of hair gel, but I usually try to avoid products. I love my hairdresser Eric Leboeuf, though, I feel like he deserves all the credit.

Sari: Staying grounded is something that’s hard to do in this industry, and you do it well. How do you keep such a level head with such an extraordinary fan base?

AL: First of all, that’s incredibly nice of you to say! I think that having people around you who treat you the way that they’ve always treated you is crucial to staying grounded. I still live with both of my parents, and I’m very close to my family and childhood friends. Having them around definitely makes it easy to remain me.

For the latest updates on Alex Lange, you can stay tuned to his social media.

Olivia Ponton has the kind of heart that can change…

By Sari Cohen
Under The Influence
Fashion
0

The New York premiere of the exhibition Christian Dior: Designer…

Malone Souliers “Give a girl the right shoes, and she…

By Sari Cohen
LET’S HEAR IT FOR “THE BOYS!”
Fashion
0

Whether you know her as Summer Hathaway from Nickelodeon’s Emmy-nominated television series “School of Rock,” or remember her as McKenna Brooks from “An American Girl: McKenna Shoots for the Stars,” Jade Pettyjohn brings that same light, love, and magic to every role she takes on.

Marie Avgeropoulos from The CW’s, The 100, talks The ‘Ark’ Of Octavia Blake

Women all over the world are saying goodbye to the BS thanks to Sofía Reyes. With R.I.P. marking another hit for the Mexican singer-songwriter, it’s easy to see why Reyes is quickly becoming the queen of collaborations. Teaming up with powerhouses, Rita Ora and Anitta, Sofia ended up creating a pop culture movement. Soon after the song’s release, the trilingual track (done in English, Spanish and Portuguese) took on a life of its own, becoming a universal message of empowerment for females everywhere.

Austin Mahone fans (aka“Mahomies”) have a lot to be excited about. We’ve seen the singer bounce back in a big way in2019. Back in February, “Why don’t we,” penned by Charlie Puth, thrust Mahone back into the spotlight.“Anxious,” followed in April.

Griffin Gluck tells INLOVE Magazine. At 19 years old, the actor has already worked with a lengthy list of Hollywood’s top stars and has a slew of impressive credits under his belt. It’s no wonder he’s been dubbed as one to watch.

By Sari Cohen
Griffin Gluck: One To Watch
Fashion
0

“I tried to channel a tougher version of myself and tried to give the character justice,” actress Vanessa Morgan recalled about what it was like auditioning for her role on The CW’s “Riverdale.” The 27-year-old plays the pink-haired, bisexual female gang member, Toni Topaz. Putting her own spin on the Archie Comics character has earned the actress quite a fan base.

With nearly 13 million followers, it’s obvious that Tessa Brooks has a message people want to hear. Her vlogs, viral dance videos, and popular YouTube channel have rightfully earned her praise. But, combined with her fierce desire to spread positivity and inspiration to others, her influence has the power to reach way beyond the digital space.

With millions of followers across all social platforms, Hannah Stocking is changing the world one viral video at a time. The 27-year-old began posting videos on Vine in 2013, which opened the door to her now widespread success.

Since stepping into her first pair of dance shoes, Glazer has toured the world with many of today’s top artists. Over the years, she’s racked up a long list of TV appearances. The 23-year-old dance phenom has become a digital superstar whose work with Shots Studios regularly garners millions upon millions of views.

By Sari Cohen
Femme Fatale – Delaney Glazer
Fashion
1
“It happened kind of accidentally,” Alex Lange tells INLOVE about how he found himself in the entertainment industry. “Originally, I started with a passion for photography and film.

At 17, Asher Angel seems to be “One Thought Away” from having life all figured out. By the age of five, he was already working with likes of Jessica Chastain and Frances Fisher. From there, Angel would become one of Disney’s most beloved characters. For three seasons, he starred as Jonah Beck in Andi Mack.

By Sari Cohen
One Thought Away – Asher Angel
Fashion
0

Men’s fashion this spring is set for lustrous details and sporty vibes. Prints and graphics are impacting this season above and beyond. New playful tucked in shirts with hi-tech pants, extra-long self-belts and wider legs are everywhere. Easy to wear day into night, comfortable and sporty approach in everyday easy and relaxed dressing.

To exude both passion and poise is something that takes most people a lifetime to achieve, but for Cara Santana, she’s already there. The stunning, smart and stylish Santana left El Paso, Texas, as a teenager and made her way to Hollywood, where she’s worked hard as an actress, entrepreneur. An influencer as well, she has earned a massive following and an abundance of adoring fans.

“I feel like we are living in a time where real progress is being made,” Gregg Sulkin recently told InLove Magazine.

“To all the young people out there, we are the future. Use your voices wisely,” he advises, “Let them be heard. Let’s continue making this world a happier, and more accepting place to live in.”

Danielle Savre is an actress whose versatility, talent and beauty define what it takes to leave a mark in Hollywood. She’s got it all and we are excited to see what the future holds.

By Elle Taylor
Living In The Moment- Danielle Savre
Fashion
0

Bailee Madison, an extremely talented, gorgeous young actress, writer and producer, has already worked with some of the biggest stars in a considerable amount of diverse and sometimes challenging roles. And she is only 18! Bailee Madison is a true multi-hyphenate, who has showcased her talent across the big and small screens as well as in the arena of producing content, as a host, a philanthropic advocate and now as a writer.

Wow, I am stunned. Alex is just insanely beautiful. Wonderful responses too.