If Hollywood is consistent with one thing, it’s finding that small percentage of people who have the “it” factor. Diego Tinoco is proof of that. The “Teen Wolf” actor just wrapped a successful four seasons starring as Cesar Diaz on Netflix’s “On My Block.” With an Instagram following of 2.7 million and a loyal fanbase on his side, the next chapter is bound to be Tinoco’s most interesting yet.

“I’ve always wanted to be an actor, ever since I was a little kid,” Tinoco tells INLOVE Magazine. “I came out to Central Casting to sign up as an extra when I was just 11 years old but got rejected because I wasn’t 18 yet. At 19, I decided to move here [Los Angeles], and wow, has it been a journey in Hollywood.”

Tinoco’s tale began like most actors: he made the move to a studio apartment in L.A. that he shared with his best friend, worked in restaurants, got a job at Postmates, and attended acting classes. Until finally, his childhood dream became a reality. “I’m still navigating this terrain,” he admits. “Honestly, it all still feels new. Especially coming back into the spotlight since COVID hit and the pandemic took over.” 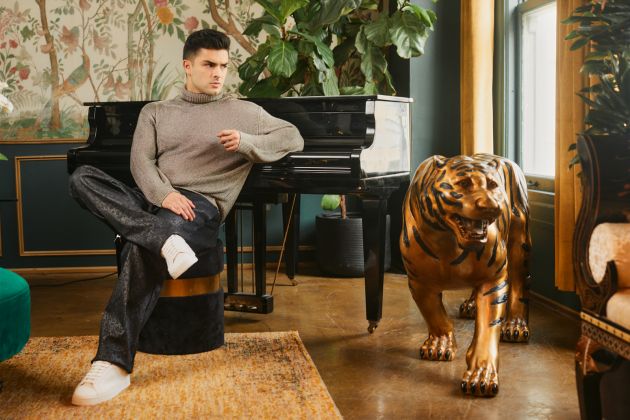 Sari: Fans have loved you as Cesar Diaz on “On My Block.” A lot of people are sad to see the show come to an end. What was your favorite episode you shot?

Diego Tinoco: My favorite episode I shot would have to be Season 4, episode 10. I never had a prom growing up, so it was nice to experience that for the first time, even if it was on the show. I missed out on a lot of experiences in high school for personal reasons, but funny enough, I got to live them out through the show. I’ll always look back on these years as some of the best times of my life. I will be forever grateful for them because I got to experience everything on the teenage bucket list. 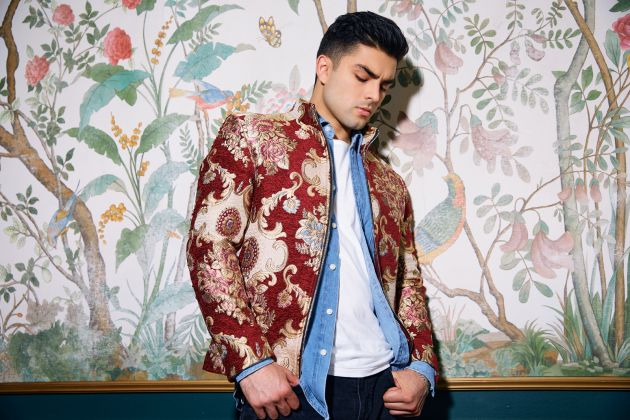 Sari: On the show, you walk the line between gang-related situations and romance. Tell me how you crafted your character to move so well between the two extremes.

Diego Tinoco: The key is just taking it one scene at a time. [It’s about] doing that one scene justice, staying true to the overall story, and understanding your character’s motives. Cesar is a kid dealing with some very serious life or death issues, but just like any teen, he also has his desires and wants. When he’s not involved in the more serious parts of his life, he wants to enjoy his life. So, it was important to instill that into his core and always leave hints of that in the work, especially when it came to romance. 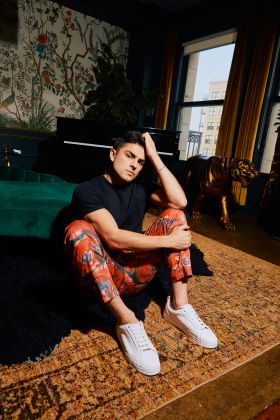 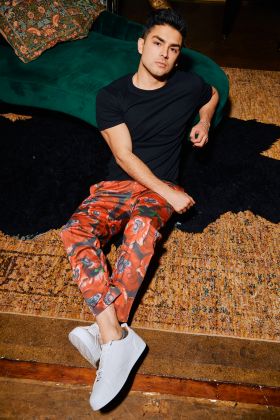 Sari: I know you’re not the biggest fan of watching yourself, but what onscreen moment have you been most proud of?

Diego Tinoco: I’m pretty critical of my work. I’m always trying to see what I could’ve done better, what worked, what didn’t, and why. It’s honestly a curse [laughs]. But I think more than a specific scene, it was going to the first “On My Block” premiere at Netflix studios and being able to bring my family, coming from Mexico and Ecuador to a premiere for a show where I’m starring as a lead. Bringing my family, team, and friends who were there with me since the beginning to watch the first two episodes was definitely the proudest moment. And the most surreal. 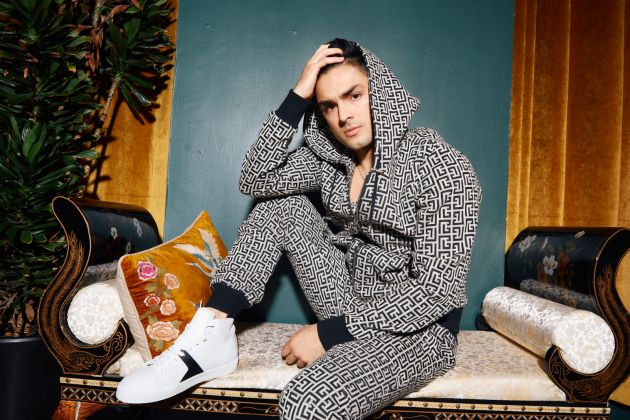 Sari: How do you feel like you’ve grown over the past four seasons, not only as an artist but in your personal life?

Diego Tinoco: I feel really grounded in my life. As an artist, and in my personal life, I know what I want. I know why I want the things that I want. And I’m working towards that direction every day in my relationships with work, friends, family, health, and finances. I have a plan, and I’m dedicated to this plan. I’m not eager to make any moves just to make moves. I’m not trying to take shortcuts because sometimes trying to cut one step forward takes you two steps backward. When I was younger, I wanted the world all in one bite. But now, I’m learning to be patient, trust the process, and enjoy the process. What’s meant for you is meant for you as long as you put in the work, and you do your best.

Sari: In what ways are you most like your character?

Diego Tinoco: I’m most like my character in the sense that we are both resilient. We both keep pushing past the obstacles in life. And we both want bigger and better things for our life. We never give up. I credit my father for teaching me that. His coming into this country as an immigrant was not an easy route but seeing his success and seeing him put in years of hard work truly rubbed off on me.

Sari: What are you going to miss most about the whole “On My Block” experience?

Diego Tinoco: The camaraderie we established between the cast, the crew, directors, producers, and the studio. That sense of creative freedom to take risks in the work and feel motivated to do so, always exploring the work to its truest depth and enjoying the days on set with your costars and crew. The days on a set can get quite long, so if this camaraderie is not there, then all else fails. I believe the chemistry and the camaraderie between the set are the keys to a successful TV show or movie.

Sari: What do you hope fans will take away from the show when it ends?

Diego Tinoco: I hope anyone who has watched this show walks away with a sense of hope. A feeling that it doesn’t matter what you’ve been born into, that you can always create better circumstances for your life. Create your plan, find out where you want to go and go. 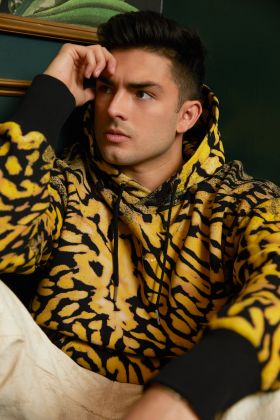 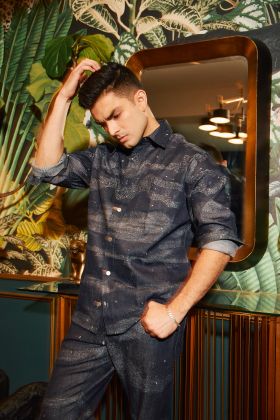 Sari: “On My Block” has been applauded for its Latinx representation. In what ways do you think Netflix and other platforms can expand on that?

Diego Tinoco: I loved working with Netflix for many reasons. One is that they provided many opportunities to people of color, not only starring in the show but behind the scenes as well. Nearly all of our directors this season were people of color. Some of them had gone through a special program that Netflix had – to develop up-and-coming directors. And ultimately let them direct our show. So, I think other studios should provide the chance for these up-and-coming artists to take their swing at the ball. Especially if they have the talent and they’re able to show and prove it. You have to remember Quentin Tarantino, Christopher Nolan, Baz Luhrmann– they were all once up-and-coming artists as well. Someone just decided to take a chance on them. So, take a chance on us.

Sari: What kind of stories do you hope to tell that do more to highlight your heritage?

Diego Tinoco: I’d really love to do an entire project in Spanish. Something that takes place in Mexico that truly focuses on our culture, beautiful country, and the spirit of our people. Something that leaves not only people of color, but everyone inspired, from all walks of life.

Sari: What can you tell me about your role in “Knights of the Zodiac?”

Diego Tinoco: My role in “Knights of the Zodiac” is a very juicy one. It’s a secret for now. But he is most likely going to be considered the most badass – a fan favorite. Could be someone who’s been in the anime, could be a brand-new character.

Sari: What else is in the pipeline for you?

Diego Tinoco: Apart from the “Knights of the Zodiac” film franchise, I’m currently working on a novel I want to turn into a screenplay. I’m also working on my own clothing line named ‘Sangre Mia.’

Sari: What are your future dreams and goals?

Diego Tinoco: I want to own a huge spot in my hometown where I grew up and have my own projects developing and releasing 24/7. Not letting anyone decide for me when I can and can’t work but rather take full control. 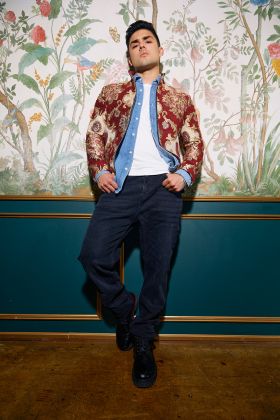 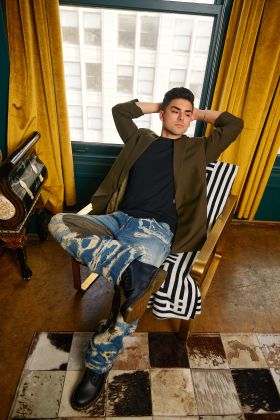 DT: Craziest DM would be: someone claiming they were my long-lost twin brother in need of 100k.

What would your “most likely” award be?

DT: Most likely award: to own a Chow Chow.

What would your “least likely” award be?

What movie makes you cry?

What guilty pleasure song can you not help singing along to?

Who was your first celebrity crush?

Would you ever join a dating app? Or meet someone online?

DT: Probably not. I like meeting in person through events or friends. Love isn’t something you order online. It’s something that should happen when you’re not looking for it. At least in my eyes. Maybe Instagram at most. But I’m really not searching at the moment.

I’m the kind of texter who…

DT: I’m the kind of texter who… forgets to text back.

Growing up, my brother taught me…

DT: Growing up, my brother taught me how to skateboard.

If I were to get a tattoo, it would be…

If I had a theme song, it would be…

DT: If I had a theme song, it would be “Dakiti” by Bad Bunny.

I would describe my style as…

What is your dream role?

One thing that would surprise my fans is…

DT: One thing that would surprise my fans is: I’m probably going to retire from acting soon.